Happy Days: why camping is key to your holistic health

Whenever we want to shed stress, take stock, refresh, rejuvenate and reconnect with our loved ones, camping or outdoor recreation are the medicines we self-prescribe. For you the same is no doubt true, but have you ever wondered why?

The role of nature is significant

The association between the outdoors and happiness isn’t a new one, and it’s a concept that takes on many forms. In Japan ‘shinrin-yoku’, which means to simply be immersed in a forest atmosphere, is practiced as a kind of restorative therapy that encourages clarity and calmness. ‘Rewilding’ describes the return to simpler ancestral ways of living, while ‘wild swimming’ emerged to contest the ubiquity of chlorine pools, and advocate the wellness benefits gleaned from swimming in waterholes, tide pools, lakes and rivers.

Whatever way you slice it, these movements and ideas are just different paths to the same point: it feels good to be out in nature. Some make the case that this is because we belong there. Here in Australia, you only need to go back a couple of hundred years to revisit a time when all human inhabitants were deeply connected with the land, plants, wildlife and weather. The urge to get back amongst nature endures within the very fibres of our beings. If you want to sound science-y, this is known in the white-coat world as biophilia; “the urge to affiliate with other forms of life” according to Edward O. Wilson who introduced the term in 1984.

Despite having a handle on this idea for a solid half a century, we’ve done a pretty good job of constructing lifeless barriers between us and the very things we want to connect with. But if the built environments and techtropolises that many of us live and work in are good for anything, it’s putting a highlighter through the positive responses we have when we’re far, far away from them. Most people (and yes, there are biophobes out there who have the reverse response) become clear, focused, calm and relaxed when they’re surrounded by nature.

So, when it comes to switching the concrete jungle for actual jungle, the data clouds for Cumulus clouds, streaming services for streaming rivers, part of the buzz we feel has to do with getting back to our ‘roots’, so to speak. Humans are the most social animals on Earth, so it’s no secret quality time with friends and family plays a significant part in our overall happiness. With technology and social media being increasingly used to replace rather than supplement real human interactions – which can exacerbate feelings of social isolation, as well as impair communication and conflict resolution skills – it’s more important than ever to schedule screen-free people time.

Put a bunch of your favourite humans in a scenario that involves teamwork, co-operation and no walls or screens to hide behind? Things are going to get real. You hear real laughter, make actual conversation, and even when you start fighting over who drained your torch battery, forgot the TP or left the mozzie net open, these are essential, authentic interactions that can’t be replicated via emails and DMs.

That camping can help you form stronger, healthier bonds with people is supported by research conducted by the Caravan Industry Australia which explored the social benefits of camping, and drew comparisons between campers and non-campers. The report found campers were more likely to feel close to their partners, children or grandchildren. Campers also reported feeling happier, more satisfied, more energised, and less lonely than non-campers.

Most campers also saw the campground as a classroom for their kids, a place to not only learn about the environment and develop life skills, but to be socially engaged and form connections with other children.

Additionally, 96% of respondents who camp believe camping can make you happier, and 95% believe it relieves stress.

What about the 5%? Well, it’s possible they just slept with a rock jammed into their back. Start breaking down all the stuff involved in a camping trip and the associated mental and physical benefits, and the case to go camping gets even more compelling. The combination of physical exertion and socialising alone is like a powerful mood-boosting cocktail of serotonin, oxytocin, dopamine and endorphins, the four chemicals associated with pleasure and happiness. While you don’t need to go camping to get a buzz from exercise or being with friends, camping does have a couple of extra cards up its sleeves.

Let there be (natural) light

Exposure to natural light is one of the greatest benefits of camping, due to its influence on not only healthy levels of arthritis-fighting Vitamin D, but also sleep quality and mood.

A study conducted by the University of Colorado in 2017 found that our circadian rhythm – the 24 hour clock that tells us when to sleep and when to wake up – is closer to the rising and setting of the sun, rather than the random times we choose to flick the switch on our artificial lighting.

With the vast majority of us seeing more LEDs than actual sunlight throughout the day, it’s not surprising the effects of delayed bed times, sleep loss and insomnia are so widely felt – we’ve thrown our sleep cycles out of whack and are living through an age of perpetual tiredness. The cure? Apparently as little as one weekend camping is enough to recalibrate your inner clock and start catching some high quality zzz’s.

If you’ve ever gotten into a funk in winter you’ll also understand the power of sunlight as a mood booster. Seasonal affective disorder is a type of depression most common in countries far from the equator, that experience long, gloomy winters with short daylight hours and longer periods cooped up indoors. While not a major concern in most of Australia, it does speak to the necessity of spending time under bright skies for our wellbeing and happiness. Just remember to sunscreen up! When you go camping you’re giving yourself space and time to relax by ‘getting away from it all’. By ‘all’ we’re generally referring to the stress associated with work, responsibility and routine.

While camping certainly isn’t always stress-free, what you don’t have to deal with is the clutter of work and home life – the physical, mental and digital mess that builds up and bums us out. Numerous studies in the past couple of decades have found these various forms of clutter to be a significant stress triggers, resulting in heightened anxiety, distraction and loss of productivity.

That this coincides with the minimalism Renaissance can’t be a coincidence. That you tend to to feel free, clear and focussed while on a camping trip, when you’re sleeping and living outdoors with only the bare essentials and none of the superfluous ‘stuff’, is no coincidence either. Serial overpackers might be the exception. We humans are a complicated, needy lot. For optimal health and happiness there’s a lot of boxes to tick. But we’d be surprised if you can think of another activity that ticks quite as many of those boxes as camping does. From bolstering real relationships to encouraging better health through exercise and restorative sleep, to answering the innate tendency we have to connect with nature and each other, we reckon there’s only one new year’s resolution you need to make (and keep). And that’s to dust off your tent, swag, camper trailer or caravan and go on as many outdoor adventures as possible in 2019. Swag Camping: why we love it

Snow Camping: why we love it

10 Tips for Saving Money as a Full-Time Nomad

How To Stay Healthy Living On The Road 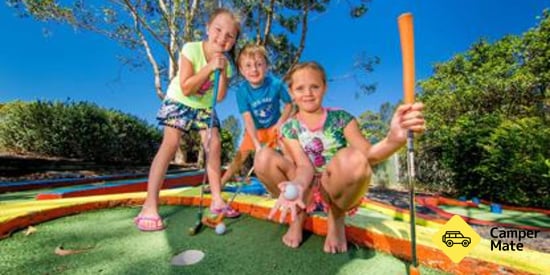