The Hills are Alive: autumn in historic Hill End

In the hills of the NSW Central West, this near forgotten gold mining town is the perfect place for a yearly celebration of arts, culture, and heritage.

A couple of years ago now, my partner and I headed out on a camping trip to a place that had been on my radar for a while. The historic village of Hill End, an old gold mining town hidden up in the high country between Orange, Bathurst and Mudgee. We set off on the long drive, climbing through some ruggedly beautiful country, expecting a bush camp beside a ghost town in the middle of nowhere. That was the picture I had in my head, at least, and the isolated drive does little to dispel this. As it was, we arrived to find a long line of cars and the streets of the picturesque and isolated town filled with wandering visitors. I soon found out that I had picked the weekend of the annual End Festival, a celebration of arts, culture, music and heritage held every April. Deciding to make the most of it, we headed into town to see if we could still find a camping spot.

With the festival growing bigger with each passing year, we found both campgrounds looking pretty full, so we headed on a bit further and found a nice secluded bush campsite, then wandered into town to explore. The History of Hill End

Hill End is one of those towns that rose from nothing in a matter of years, only to hit its peak and slowly fall right back down again. Its origins lie back in 1851, in the early days of the NSW gold rush. Although gold had been discovered decades prior, its existence in Australia was not made known to the general public until 1850, in a move by the government to stem the flow of colonists leaving for the Californian goldfields. The first signs of gold were discovered almost immediately in the Bathurst region, and the rush was born. Hill End rose dramatically over the next two decades as the prospectors came flooding in, eventually surpassing and collapsing the neighbouring town of Tambaroora. At its peak in 1870, the Hill End area had a population of almost 30,000, including visiting diggers working in the area. The township boasted 51 registered hotels and 28 pubs.

By the mid 1970s it had already begun to wane. It declined steadily after the gold ran out, dropping to a population of a few hundred over the next hundred years, and now down to only about 80 individuals who keep the historic town alive. Evidence of this rich past still lies everywhere, from the old mine workings and rusted relics of machinery that dot the landscape, to quartz roasting pits, historic cottages and tin huts. The nearby Bald Hill Tourist Mine offers tours into one of the long abandoned mines, and the Heritage Centre gives a glimpse into this past era.

The Town and Festival

These days, the town is a charming relic of a bygone era hidden up in the hills. Many of the old buildings have been restored, with the General Store and Royal Hotel all that remain of the 28 original pubs, providing groceries, coffee, food and antiques year round, as well as several rustic accommodation options. In autumn the old town is awash with colour, with large stands of chestnuts, willows, maples and cherry blossoms lining the streets. The End Festival is now in its 4th year, and the old town is the perfect site for the free event. It runs from Friday night to Sunday afternoon, April 12th - 14th this year. Concerts and vaudeville shows are held in the Royal Hall, which usually need to be booked ahead of time, while free live music is provided throughout the festival, showcasing local blues, folk, country and rockabilly acts. Stalls selling local products line the streets, as well as workshops featuring leather-making, woodcarving and other crafts. We found a spot on the grass and sat in the crisp autumn night, drinking hot chocolate and watching the live music beneath drooping willows strung with colourful lanterns. Stalls sell hot food and local produce such as cheeses and desserts, as well as craft beers, wine and ciders. On a morning walk into town the next morning, I found bacon and egg rolls, fresh coffee, and an Texan-style BBQ truck selling breakfast tacos. Not bad for a camping breakfast. The festival continued the next day, but with clear skies and crisp autumn weather, we set out to explore the area. The Golden Gully and Bald Hill walks showcase the dry gullies and open woodland that surround the town, with old mine workings and other relics on display. I strung together the Bald Hill walk with a climb to Bald Hill Lookout, which has great views over the town and surrounding countryside, then made my way back to camp via a network of dirt trails that crisscross the woodland. Beaufoy Merlin Lookout, named after a photographer who recorded Hill End at its peak, is best left for sunrise or sunset. The expanse of steep gullies and rolling hills is spectacular in the light of dusk and dawn, and the surrounding woodland is rich with birdlife. There are two well equipped campgrounds at Hill End, The Village and Glendora, with the former right in town, and the latter about a five minute walk away, set back into the surrounding bush. There’s the historic accommodation in town, some great camping spots along the nearby Turon River, while a lot of visitors choose to stay in the nearby towns of Bathurst, Mudgee or Orange. These areas are all known for their food, wine and rich heritage, and Orange in particular can be spectacular in autumn. During the festival, buses run to Hill End from Mudgee and Bathurst. While Hill End can be approached from either Mudgee or Bathurst along paved roads, to the more creative, about a dozen other ways can be found. An expansive network of dirt trails cover the surrounding landscape, crossing multiple national parks and reserves, and you could easily lose yourself into them exploring for days at a time.

The Bridle Track, once a steep, windy and hilly trail from Hill End to Bathurst passable only to riders on horseback, is now a relatively easy 4WD track. Unfortunately, due to a recent landslide, it’s impossible to drive the entire track. Fortunately, there’s plenty of other 4WD opportunities. The nearby historic town of Sofala is also worth a visit, and from here, you can follow the tranquil Turon River all the way to Turon National Park and on to Capertee, or even through to Lithgow via Winburndale Nature Reserve. The entire area is a spectacular expanse of little-visited bushland rich with history and camping opportunities, only a few hours from Sydney.

Stay on the way

Canobolas Caravan Park is located in the picturesque town of Orange, around 40 minutes from Bathurst and under two hours from historic Hill End. The quiet pet-friendly property is the perfect place to stay while soaking up the region's prized wineries, farm gates and stunning rural surrounds. 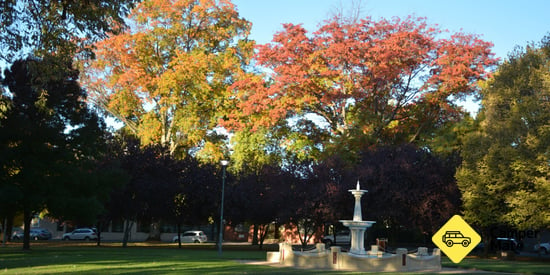 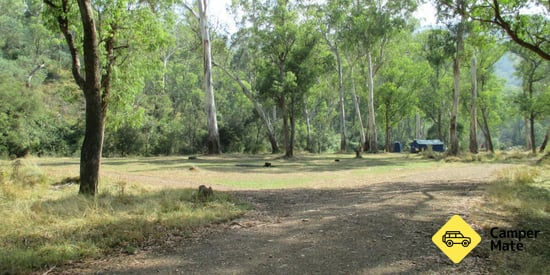 Historic and heritage sites in Melbourne A mini break in historic Berrima 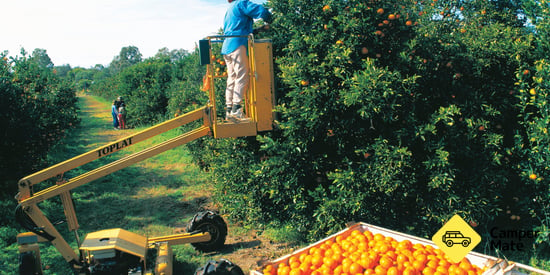 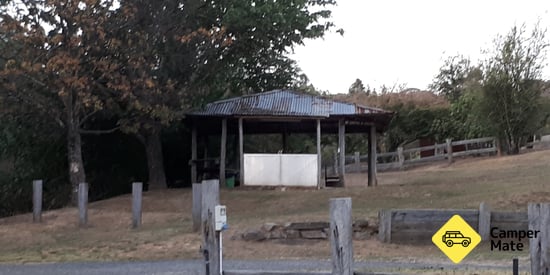 Autumn in the Bay 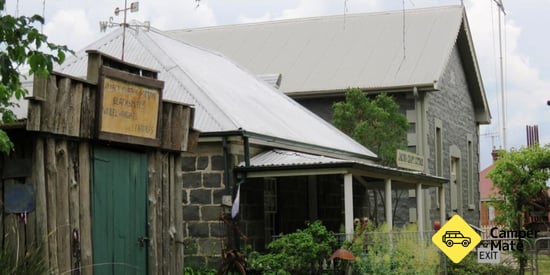