Nestled among the red dunes of the Simpson Desert, along the famed Binns Track, is the Old Andado Homestead, home and final resting place of an extraordinary woman – Molly Clark.

The homestead, in the Finke River Floodplains, appears like a mirage as you drive over yet another vast dune. Some consider this area an inhospitable, dry, hot, dusty place, with nothing to offer but flies. But for most, it is an incredible oasis of eucalyptus trees and wide open skies that is steeped in history, with the sweetest water you’ve ever tasted.

The Binns Track is an interesting one – if you’re driving up through the centre of the country then signs to it seems to pop up all over the place! Essentially it runs from Mount Dare Hotel in South Australia to Timber Creek in the Northern Territory and it is 4WD heaven! We took on the track as far as Alice Springs after meeting the current caretaker for Old Andado Homestead in the Mount Dare Hotel on Anzac Day. He was halfway through a bottle of rum, toasting old mates and sharing his stories of Molly Clark, Old Andado and the Vietnam War. It was certainly an eye-opener for the kids!

If you like interesting people, then Bobby “Cobby” Ross is just the sort of person you want to spend some time with. Born into a droving camp, he never went to school, living his early life in the saddle. His first introduction to Old Andado and Molly Clark was when he was eight years old. He was part of a droving crew that was moving cattle through the property. One evening it was his turn to take watch, which involved staying up all night to keep an eye out for dingoes and straying cattle.

When Molly heard this she grabbed him, told the crew that there was no way an eight-year-old was going to do that, and she took him inside, putting him to bed in a proper bed and feeding him up. Molly was such a formidable force that no-one questioned her decision. From that time onwards, every time Cobby’s droving party went through Old Andado, he slept in a bed. He never forgot Molly’s kindness and made the decision to repay her kindness by looking after the homestead after she passed away and keeping the story of this incredible woman alive.

Back in the day, Andado was a cattle station of over 10,000 square kilometres, about the size of Lebanon. Molly’s husband Malcolm “Mac” decided to move there when the opportunity came up back in 1955 to manage it with the potential of eventually owning the property. She arrived there with three young sons in her early thirties. The isolated property is located over 300 kilometres from Alice Springs, mainly on unsealed roads. That doesn’t sound too bad, but the road is pretty much made up of sand dunes, which heat up as the sun beats down and can become extremely boggy. Molly apparently knew this route like the back of her hand and drove it like a bat out of hell! We just took it slow and steady, taking the opportunity to camp out in some of the most spectacular countries. Molly was one of the first people to bring tourism to that part of Australia, working with the government to develop what is now known as the Binns Track to enable tourists to access the area more easily. Her wish was for people to come and see the Old Andado Homestead, to get an understanding of pioneering outback life. Most people thought she was nuts at the time, but she was determined to make it happen.

Molly didn’t have an easy life by any stretch of the imagination. She had the daily struggles of living in a very remote part of the country, she lost her husband in a light plane crash after he had a heart attack whilst checking on cattle and then soon afterwards she lost her eldest son. He was driving a truck across a railway line, with his daughter beside him, when a train came through and smashed into his side of the vehicle. His daughter survived.

Amongst all this tragedy, Molly stayed stoic and remained at Andado, taking over the running of the station. However, in the ’70s and 80’s, there was a growing awareness of TB and Brucellosis (a disease that spreads rapidly amongst cattle herds) and even though there was no evidence of Molly’s herd having any disease, the government decided that every one of her 5000 strong cattle herd should be shot. Molly was also ordered not to have cattle on her property for three years afterwards. She was forced to sell Andado. The time it took to sell saw Molly use up all her savings and her remaining sons move off the land. Molly refused to go and managed to secure a parcel of land around the Old Andado Homestead to continue with her desire to bring tourism to the area.

The old homestead had a tin roof, without any insulation, which would make the house heat up to over 50 degrees in the summer. There was no air conditioning until late in her life. She would still cook inside on the old stove which would make the kitchen unbearable for others, but not Molly. (insert photo 4)

At the other extreme, in the winter the desert nights get freezing and she had no heating. The sandstorms would sweep through the area a few times a year and the house would get covered inside in a film of red dust.

While Molly was alive, tourists couldn’t resist making the journey to go and see this strong, pioneering woman. Even today, with Molly having passed away people like us are still going there. Caretakers continue to be in place today. These are people who have a passion for keeping this woman’s memory alive. The homestead is exactly how it was when she left it. She ended up living her final years in Alice Springs, much to her disgust, but her wish was to return to Old Andado, and today you can visit her grave near the homestead.

Molly’s home stands as it was before she died. She never modernised the home, apart from installing an air conditioner. It looks like it did in the 1920s even before she got there. The salt and pepper shakers, the large cans for storing flour, tea and sugar, the old piano that Molly used to play... It hasn’t been restored to make it look like a museum, it still looks like a living, working home. Cobby told us that he feels honoured to be looking after it for the woman who brought him into her home all those years ago.

Making the journey through this remote part of the outback was incredible. You can free camp on the track, feeling like you are hundreds of thousands of kilometres from anyone and anywhere, or you can camp at Old Andado. We didn’t pass another car on our trip, making the experience even more special.

As travellers, we are always grateful to those who upkeep these special places, where we get to learn more about our past. So, if you are considering doing a trip that is a little bit more off the beaten track, then this is definitely one to look at. 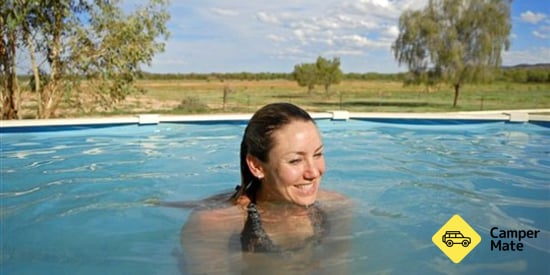 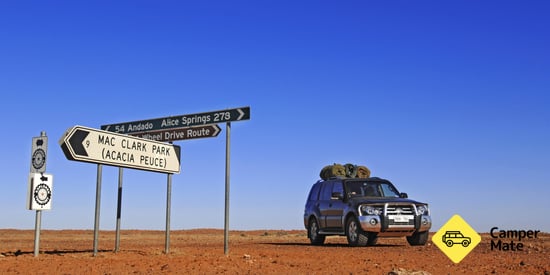 Paid Campground in Hobart and the South

AUD $30 per night per vehilce 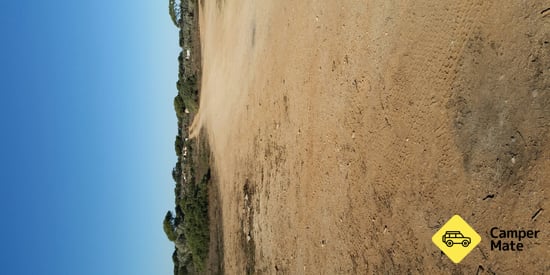 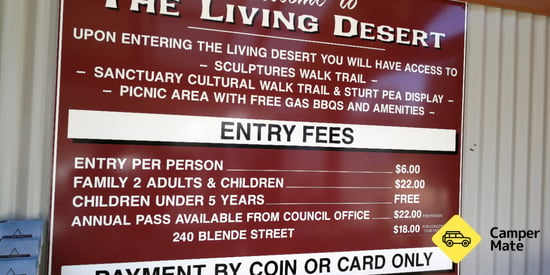 The Living Desert and Sculptures 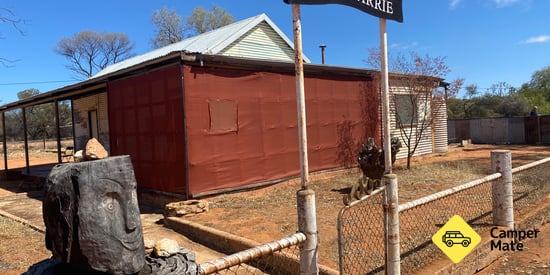