Whangarei Heads Peninsula is a landscape of jutting pinnacles and peaks, the result of long ago volcanic activity. Mix it up with small bays, white sandy beaches and turquoise water and you get some spectacular scenery. Situated south-east of Whangarei in Northland, there are a number of walks to its summits, giving vistas across the area.

The longest walk in the area, Te Whara Track, is situated in Bream Head Scenic Reserve, 45km from Whangarei. Requiring a high level of fitness, the 7.5km track has three access points: Urquharts Bay, Peach Cove carpark and Ocean Beach. All are reached by driving the twisting, coastal Whangarei Heads Road which ends at Ocean Beach. Starting from the whitish sands of Ocean Beach, a sandy path leads behind the dunes and up amongst mature pine trees. Once above them, there’s a view back down over the beach. White waves frill the sandy coastline, scalloped by rocky outcrops protruding into the sea, a medley of blues.

Walking across an open ridge, you’ll come across an information board about the area, once named Naval Post No. 7. Used to defend Whangarei from the threat of Japanese invasion in the later stages of WWII, five naval staff were stationed here. Along with the concrete remains of a power house, laundry, ablution area, mess and quarters, I discovered the more intact radar station, hidden amongst bush and facing out to sea, its antenna long rusted off.

The track, marked by orange triangles, continues never-endingly up many stairs, some steeper than others, through native forest. Puriri roots like writhing snakes wander over the path; the high canopy shades from the sun.

At a large boulder we followed a narrow rocky trail which, although it had a sign stating it wasn’t a formed or marked track and warns of steep drop-offs, seemed to be the right way to go…

It led to a maybe five-metre high rock. Almost vertical, but with spots for feet and hands, we clambered up it expecting to find a path continuing on its other side. There’s none. It’s an almost sheer drop-off to the sea, 476m below. Nervously perched on the top of what I discover later is the summit of Bream Head/Te Whara, I surveyed the panorama. Farmland hemmed by rolling and peaking hills, a cluster of homes breaking the greenery, finishes at Ocean Beach. Further around is Busby Head and across the harbour, Marsden Point Refinery where coastline sweeps away from it in both directions; hills rise in the far distance. Backtracking, we spotted the orange marker and the correct trail. Having reached the peak, the trail undulates from here. Towering boulders make walls alongside the trail; two massive ones balance against each other forming an arch to walk under. Tangles of supplejack vines hang from trees in a forest that’s so thick the sun only leaves an occasional spot of brightness on the trail.

You’ll come across the junction where the trail leads to Peach Cove carpark. This can shorten the walk to a four hour loop. From the carpark head back via road for 1km to Ocean Beach carpark.

Continuing on the Te Whara leads to another junction with a sign stating Peach Cove, 20 minutes, 800m. Steps lead down the majority of the way, quite steeply in places with occasional peeks of the ocean. At the bottom a large boulder with a pohutukawa growing atop stands nearby a yellow-doored DOC hut. Sleeping 8, it’s set in a clearing surrounded by bush with the beach, a small sandy cove where shags can be seen resting on rocks just off shore, a brief walk away. A long-drop is concealed in bush nearby. It’s a great weekend-away spot which must be pre-booked. Deck chairs in the sun on the hut’s verandah will tempt, but there’s still a fair way to walk to complete the Te Whara. I counted the 807 steps back up to Te Whara track to take my mind off my laboured breathing and burning calves.

Once at the top, downhill prevails and bush opens in places for vistas of Ocean Beach on one side of the head and Whangarei Harbour on the other. The roar of a car or motorbike on an unseen road might disturb the peace.

You’ll probably not notice any significant climb or peak when you're summiting bush-clad, 395m Mt Lion. The descent though, 1200 steps, is certainly enjoyable after all the uphill with occasional glimpses of Busby Head, the turquoise sea lapping at the white sand of Smugglers Bay and boats dotted in Urquharts Bay. The coast weaves in and out; the spires of Mount Manaia like ship smokestacks in the distance.

The end of Te Whara track is reached around 6 hours after starting, finishing in gently rolling farmland. A ten-minute walk bring hikers to Urquharts Bay, where a road runs along the waterfront, a sprinkling of homes and baches opposite it looking out to Mount Manaia. A swim here is well deserved! If walking Te Whara one-way, it’s best to have a vehicle at each end, otherwise the walk back to Ocean Beach is another 4.5km via the road.

The Busby Head Track can be added to the Te Whara Track. At the end of the Te Whara, instead of heading right to Urquharts Bay, turn left. This will add on around 1.5 hours and finishes in Urquharts Bay. It’s a fairly flat 3km walk and from Te Whara track, it takes in the incredibly bright, white sandy Smugglers Bay (a great spot to stop for a swim), then gun emplacements from WWII which look across the harbour to Marsden Point Refinery. 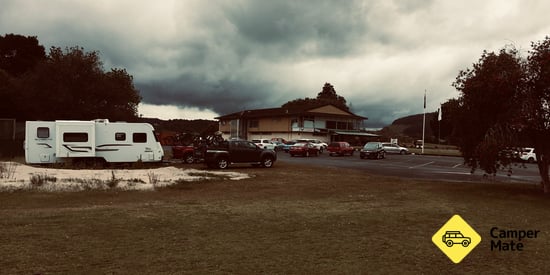 $10 per night (showers & toilets open only when shop is open) 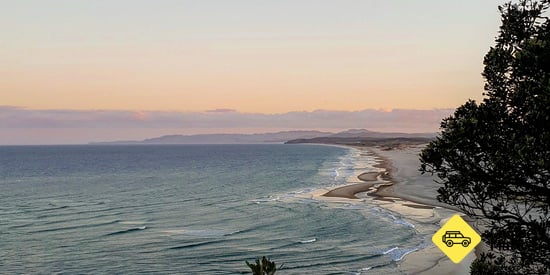 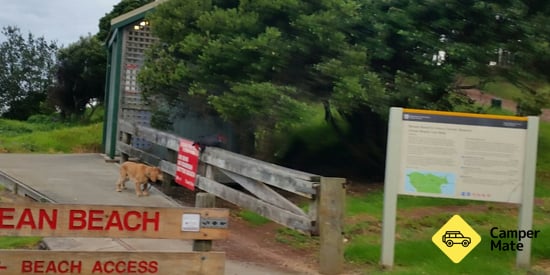 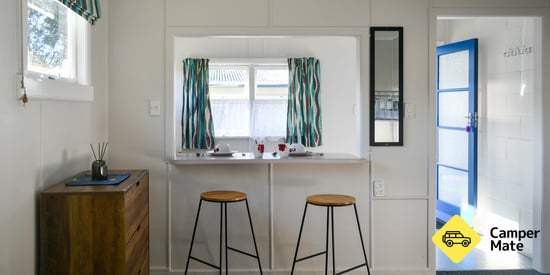 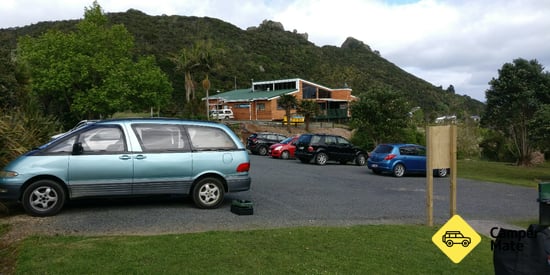 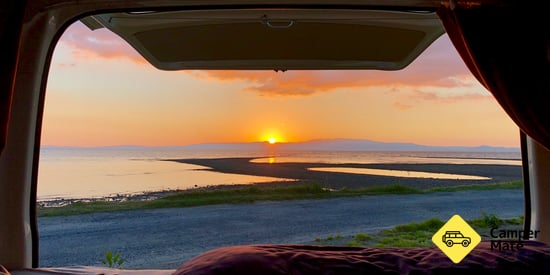 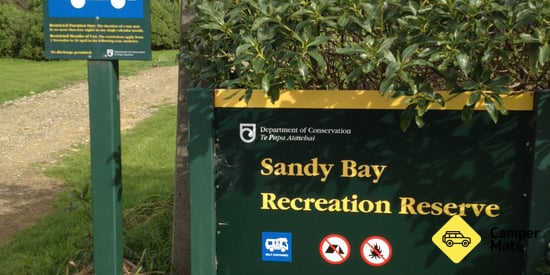 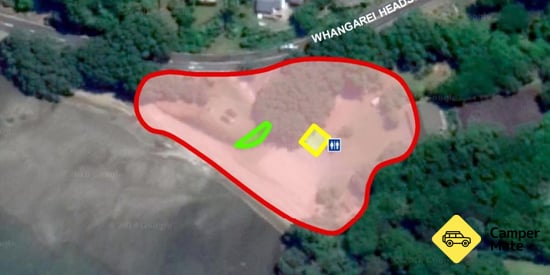 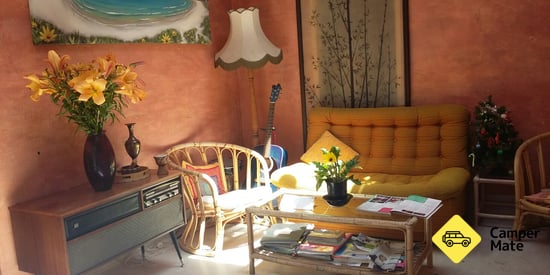