Did you know that one of Australia's most important wetlands is in far western Queensland in a remote, arid and isolated area? Around 900km west of Brisbane, just above the Wild Dog Fence (formally the Dingo Fence), is Currawinya National Park.

At nearly 155,000 hectares, Currawinya NP is a great place to visit and explore the hidden secrets within the park. Access to the park can be done from two directions and is camper trailer friendly, but you need to be well prepared as it’s a remote and harsh yet beautiful place, and you may not see another soul for days. From the north, head out to Eulo in western Queensland along the Adventurer Way and then south for 100km along the Hungerford Road. This unsealed sandy/rocky road is wide and generally in a reasonable condition for the area as you travel on the western side of the Paroo River. Passing through the remote private stations sometimes makes you wonder, ‘why would you live out here?’

For much of the 100km, the road is fairly flat with only a few large undulations which give you views across the plains. Probably the biggest hazard is the wildlife or stock along the way. Emus, goats, kangaroos and cattle, right down to the snakes and lizards that need to cross the road in front of you, can be a surprise sometimes.

The southern entry is via Hungerford, 220km northwest of Bourke, right on the New South Wales and Queensland border. The roads to and within the park can be impassable when wet due to several creek crossings and flooding from the Paroo River, but information can be sourced from the NPWS website or locally at Eulo, Cunnamulla or Hungerford. Midway along the road through the park you'll be greeted by Currawinya’s stunning rock formations and, nearby, the park information boards – a great spot to sit down for five minutes to read the history and other features of the park before walking amongst the sandstone sculptures.

After getting the heads up about the Currawinya, the road to the camping area is just opposite the sculptures and is an easy 2km drive to the first camping location. Here, beside the old shearers shed you can camp and have the joyous option of flushing toilets and bush showers nearby. The water to the showers are gravity fed from a large tank nearby and if you time it right (mid afternoon) you'll have hot water because the water runs through black poly pipe on the ground to the showers. The showers are outback style, with extra large shower heads, corrugated iron sides that you can peer over, and large pieces of hessian for doors and dividers – showering in the outback at its best. But don't worry, there are tall divisions between men and women. Entry into the massive shearer’s shed is allowed and it’s fantastic to see everything still in pristine condition after 60,000 sheep were shorn in the shed. Walking around the stalls, monkey press, scales, sorting rack and slips, it looks like it wouldn't take much for it to fire up again. In the surrounding area you can wander around other outer buildings, the meat house, accommodation blocks and the woolshed pens. Best part about it? No bloody graffiti.

Not many people realise is that Currawinya is also home to the endangered bilby and within the park there is a 25km square secret compound where the bilbys can freely roam and breed away from humans and other wild predators. A viewing shed, information boards and a large copper statue highlight the importance of what local rangers and volunteers are doing within the park to protect our little marsupial rodent. Currawinya was chosen for the research area because it’s approximately the centre of where the bilby population roams. There is a self registration box here too if you haven't done it online or by phone prior to your arrival for your camping fees. For those who are after a little more secluded camping away from others, head another kilometre or two down past the wool shed and camp beside one of the Ourimperee waterholes. With a long stretch of water to camp beside, there’s space for everyone.

Fishing, throwing a yabbie pot in the waterholes or even kayaking are great ways to spend the afternoon. Camping under the huge river gums while birds float by or dip down for a drink is a real eye opener, with pelicans, swallows, little finches and whistling kites all making this area home.

Further north and west of the old Caiwarro homestead, Pump Hole campground can be found near the old pumping station relics. Right on the Paroo River, you can have this whole area to yourself and the only facility is a park bench and chairs. This park only sees around 2000 visitors a year, so finding a spot with water views should be easy. All of the areas are camper trailer friendly, although if you’re heading across the Paroo River just check the depth of the river according to the side markers. As well as the great camping options in the park, Queensland national parks has opened the area to explore other features. From the woolshed it’s a 30km drive north to the old Caiwarro homestead. Walking around the mangled building ruins and old gear, it’s hard to understand how people survived and gelled out here. But with a tennis court, cricket pitch, school and shop near the grand homestead of Caiwarro, it must have been a tight knit community.

Walking around the homestead you can still see pieces of machinery still on the ground, chimneys still stand and the structural bones of several buildings are struggling to stand up. Just nearby a track leads you across the Paroo river to the old pumping station where today an old steamer, several boilers, ploughs and windmills are sitting quietly in the paddock.

Caiwarro dates back to the mid 1800s when it covered nearly 1 million acres running sheep and cattle through the billabong system and sand dune country. Over the years the pastoral land was reduced and in 1991 the Queensland government purchased the land to protect the wetlands and historical features. Currawinya is a special place for the local Budjiti people who benefited from having a salt and fresh water lake within 5km of each other. 4WD is recommended for the 28km road to the lakes which starts just south of the camp road. This red sand based road winds its way over small dunes and both sides are lined with harsh Mulga trees.

Occasionally there are small breaks where you have views across the low level plains past the salt and turkey bush. Separated by only a few dunes, the first lake you come to is the freshwater Lake Numalla. Access to this lake is permitted as well as swimming, kayaking, canoeing and fishing in selected areas. A short 6km drive further west leads you to the lookout station over the saltwater Lake Wyara. The viewing area can be disappointing if the lake is low as this is as close as you can get to the lake, but it’s reported that 75% of the park’s birds can be found here.

Lake Wyara normally dries up first and leaves a vast white salt-pan, leaving the birdlife no other option but to move further north. When Wyara is full and times are good, spoonbills, seagulls, ducks, pelicans and swans feed on fish and shrimp that are in abundant numbers in the lake. In a good year it’s reported that nearly 100,000 birds frequent these lakes either looking for food or to breed. If you have another day to explore Currawinya, head just 15km west from camp along the Boorara Road and spend time wandering around an outcrop of massive granite rocks. From the car park you'll stroll past Mulga, Gidgee, Turpentine and Hopwood bush towards the ever increasing rocks that seem to leer at you the closer you get.

Wild goats use these rocks for shelter, so you might just see them scamper away as you get closer, as well as the skeletons of fallen goats between rocks. The views from the top are nothing short of spectacular as they stretch north towards the Hoods Ranges. Currawinya just isn't another national park. It’s home to the endangered Australian bilby, has some of the best waterside camping in the state, it’s one of the few parks where you need a 4WD to explore the outer reaches, has two completely different lake systems, a massive granite boulder area, historical ruins and a woolshed where you can explore. Throw in some recreational activities with fishing, kayaking, birdwatching and walking trails, and most people won’t be disappointed after visiting the area. 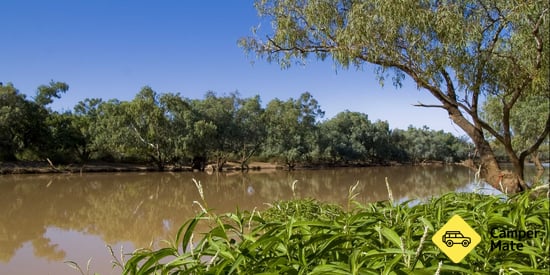 Six ways to sample the Otways