The Highlights of our Fraser Island Adventure

Chances are you’ve heard of Fraser Island before. If you haven't, you’re in for a treat! Fraser Island is like a nature bomb explosion – if there is such a thing! You’ll be taken right back to your roots exploring this incredible sand island. In fact, it’s the largest sand island in the world. Home to perched lakes, freshwater creeks, dingoes and rainforests, you’ll be adventuring all over the island for days! Our adventure started off in River Heads where we caught the ferry across to the island. River Heads is about 20 minutes south of Hervey Bay in Queensland. To give you an idea of where Fraser Island is, it basically runs from Bundaberg all the way down to Rainbow Beachstretching for 123 kilometers.

My partner James and I spent 4 nights on Fraser Island, exploring as much as we could while we were here. While we got around to a lot of places, we have picked out our highlights from the trip!

Lake McKenzie was number one for us. The ombré look of Lake McKenzie is what makes it so amazing; starting from a dark, deep blue in the middle and extending out to a light crystal clear blue at the water's edge where it meets pure silica white sand.

The other wow factor? This lake sits on top of a sand dune, making it a “perched” lake as it is full of rainwater only. The sand and natural matter in the lake act as a “plug” stopping the water from draining out. The water here is also so pure that nothing can live in it. At the eastern side of Fraser Island you’ll find Eli Creek. The creek can be accessed from the beach and heads inland through gorgeous pandanus trees. We followed the boardwalk up the creek and entered the water from here. The water was so clear and so refreshing. An unimaginable fact we discovered is every hour Eli Creek releases four million litres of fresh water into the ocean! Depending on how you look at it, you might be lucky enough to see dingoes roaming the island. We saw a handful during our time exploring. Whilst it can be a controversial topic, we always found it was just best to use common sense and follow the rules set to be dingo-safe.

During sunset near one of the resorts on the island, a female dingo wandered up to the crowds. We found out the dingo had been kicked out of her pack. She seemed quite friendly and would come up very close to people. She even stole my thong! There was a non-English speaking tourist standing right near us who crouched down to take a close up photo of the dingo. After repeated tourists telling him to stand up, we realised he couldn't speak English, so used hand gestures to quickly tell him to stand back up. This just shows looking out for others here is also extremely important. A simple mistake like that could have resulted in the man being bitten, and cost the dingo its life. Winding through the rainforest

No matter where you are on Fraser Island, you’re most likely wandering through a rainforest. Whether you are on a bushwalk, or driving through the tracks, you’re bound to be surrounded by tall, luscious greens. Our favourite walk was the boardwalk at Wanggoolba Creek, Central Station. There are huge ancient ferns, satinay trees and the amazing strangler figs.

The Maheno is a bit of a landmark destination here. It is hard to miss it. It was wrecked onshore in 1935 during a cyclone. It seems so much bigger in person and to be able to wander up so close to it was pretty cool. It lies 10 kilometers north of Happy Valley on 75 Mile Beach. Sunsets over the water

One of the cool things about Fraser Island is you can see the sun set over the water! Pretty awesome for the east coast of Australia. You can see this from the west side of the island at the Sunset Bar at Kingfisher Bay Resort. We watched three sunsets here and each was just as spectacular as the next. Getting up close to whales

Fraser Island is one of the many places on the east coast where you can see humpback whales. As Hervey Bay is one of their resting areas, they really are everywhere here! We saw them on the east side of the island as we were driving along the beach highway.

We also went out on a whale watching boat, with the intention of swimming with the whales. Unfortunately it was quite a windy, choppy day and none of the whales were curious enough to stick around the boat so we didn’t get a chance to get in the water. Although, there were a number of whales and their calves who swam up to the boat to feed so we did get to see them up close. They are beautiful! There are two resorts on the island, or you can camp under the stars. If you decide you want to spend your nights on the beach, make sure you come well prepared with all of your camping gear. And remember, as the island is a sand island, you’ll need a 4WD to get around here.

If you can, we think it would be an awesome experience to try both. A couple of nights at a resort, and a couple of nights on the beach. Getting the best of both worlds! We chose the Kingfisher Bay Resort on the western side of the island.

Fraser Island has been a stand out destination for us on our trip around Australia. We loved the freeing feeling of getting back to nature in seclusion, the incredible natural wonders and having so much to explore. We definitely feel like we have so much more to do here and know we will be returning in the near future. Want to find more campsites and attractions along the Fraser Coast? Download the free CamperMate app

Camp along the way

Edge Of The Bay Resort 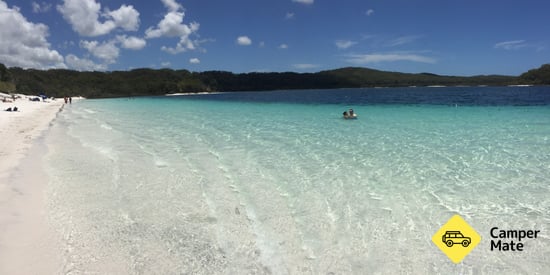 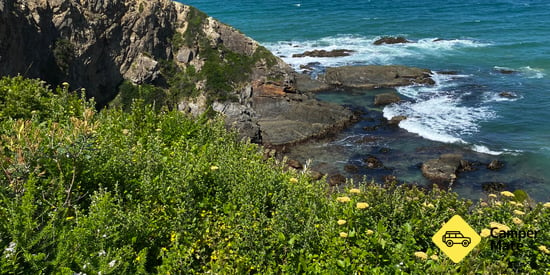 Things to Do in Southern Queensland Country 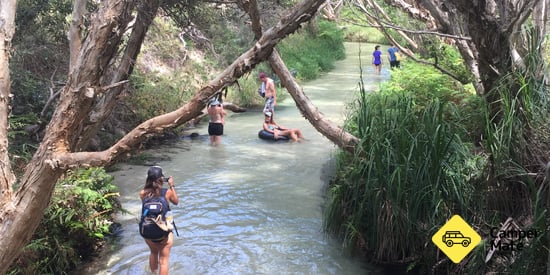 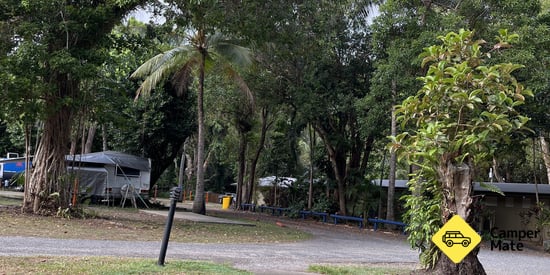 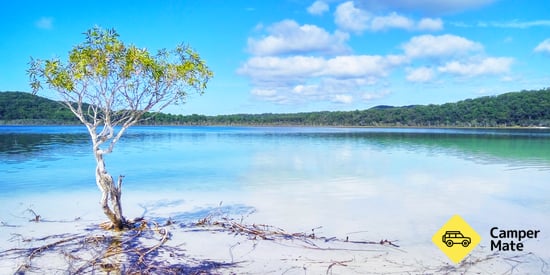 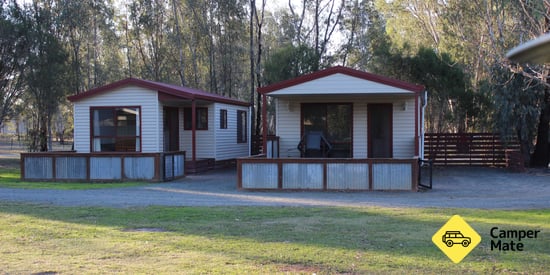 Fraser Island: let your air down