Nestled in the lush valleys of Gippsland, Walhalla is one of our favourite places in Victoria and, even though we’ve visited many times, it never fails to inspire magic. Less than two and a half hours from Melbourne, this quiet and historic town was once one of Australia’s richest towns. Step back in time as you experience the valley of the Gods for yourself.

A bit of history Originally named Stringers Creek, by the mid-1960s the flourishing town became known as Walhalla, after the largest gold mine operating at that time. It’s thought the name draws on mythology where “Valhalla” represents “the valley of the Gods.”

It’s a slow and steep, winding drive down the mountain road that leads into this picturesque township and I can only imagine how it must have been for the miners that lived and worked here back in the gold rush days. Hidden in a deep valley in the isolated Victorian alps Walhalla was a boom town of the 1880s and in its prime was one of the richest gold areas in Australia. The gold under the town harvested 72 tonnes. That’s more weight in gold than a Boeing 737. When the mines closed in 1914 its demise was rapid and the town of roughly 3000 people went bust. However some structures remained and in the 1990s, with renewed interest in Australia’s heritage, many of the homes and shops began to be rebuilt. Today, thanks to a small group of locals, dedicated groups and volunteers, its rich and fascinating history remains.

Walhalla only has one main street, a narrow, curved street snugly bordered by colonial style buildings and European gardens. The street is lined with interpretative signs, from one end of the town to the other and is easy to explore on foot. From the cemetery built on the mountain side to the site of the Warne’s Water Wheel at the Southern entrance to the town to the former site of the Chinese Gardens and the Incline Tramway, 30 signs tell the story of Walhalla’s rich and colourful history. At one stage, during Walhalla’s peak, between 1885 and 1895 there were about 4,500 people and seven hotels operating in Walhalla. In 2021 just 20 people live here and there’s only one hotel in town. It was the last town in Australia to have electricity connected in 1998 despite being one of the first towns to have electric lights installed. Because power came late all power poles are underground. Mobile reception finally came to the town in 2019!

Things to see and do today

For such a small place there's a lot to see in Walhalla.

Don’t forget to use Campermate’s maps to filter and find things to do, campsites and road trip essentials while exploring Gippsland. If you’re looking to stay the night in Walhalla, the Star Hotel is your choice. The hotel is a replica of gold-era’s Star Hotel that was destroyed by fire, in the centre of town. Grab a cold drink down at the Wally Pub. Or camp at one of the two campgrounds in town, Walhalla North Gardens, which is free, and the Chinese Gardens Camping Ground with fees being paid at the General Store. There’s casual camping alongside the road in certain spots that aren’t marked as Day Visitors Only. There’s free camping near the river at Coopers Creek, approximately 16kms away, and camping at Rawson with an awesome Stockyard Bar and Bistro that’s well worth a visit. Walhalla might be tiny, just 3km from start to finish, but what it lacks in size it makes up for in heart. This remote alpine town at the bottom of a valley is a joy to visit in any season and from one weekend to another you never know what sort of magic you’ll find and what characters you’ll meet, from a wedding on the railways to a piped piper playing high on top of the clifftop. It’s that sort of place. Step back in time and experience the magic for yourself.

Let's Get High: overnight on the Main Range

Historic and heritage sites in Gippsland 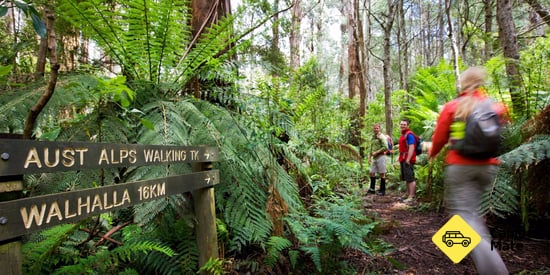 The Valley of the Shadows

Emirates One & Only Wolgan Valley

Waratah: the town at the top of a waterfall