Back Roads to Kununurra

It’s amazing what you discover by getting off the beaten track in the Kimberley, and the back roads to Kununurra are no different.

It’s easy to take the Great Northern and Victoria Highways to drive from Wyndham to Kununurra in the far north of Western Australia, but where's the fun in that? If you take into account all the amazing things you’ll see if you take the back roads, including saltwater crocodiles, you'll be kicking yourself. Wyndham is the Kimberley's oldest town, and from the lookout at the Bastion, you can see the five rivers that flow into the Cambridge Gulf; the Pentecost, Durack, King, Forrest and Ord. Philip Parker King was the first European who sailed into the gulf in 1819 and named it after the Duke of Cambridge. It wasn’t until 1879 when explorer John Forrest realised the grazing potential of the area and soon the Duracks were on their way from Queensland with cattle and horses. The discovery of gold in Halls Creek in 1885 led Wyndham to be established as a port and trading post and business was booming, but it didn't last long and by 1912 there was little money left in the local economy. In 1913 the WA government began construction of the Wyndham Meatworks that became the town's mainstay until it closed in 1985. The town has since seen a decline in business with tourism now playing a part in the local economy. A ONCE BUSY PORT IS NOW A QUIETER PLACE

Having explored the town, I drove past the “Big Croc”. Hard to miss that’s for sure, and thankfully they don’t get as big as this concrete version. Taking the bitumen 34km south from Wyndham led me to “The Grotto”, a popular and safe swimming hole with the locals, especially during the warmer months.

The walk down is via 140 rock steps and waiting below is a beautiful gorge, a few degrees cooler and very refreshing. A couple of old ropes hang from the melaleucas as evidence of the great times had in this ancient waterhole. In the wet season, a waterfall pounds the rocks below, spectacular viewing that's for sure. THE GROTTO IS A POPULAR HANGOUT ON A HOT DAY

Backtracking 2km along the highway leads to a turn off onto The Old Halls Creek Track. Constructed by convicts during the Halls Creek gold rush, the remnants of the old cobblestones can still be seen lining some sections of the track. This 4WD track is only 23km long, but well worth tackling with a couple of detours thrown in that’ll add to the adventure. The first is Alligator Hole (more commonly known now as Crocodile Hole), a saltwater crocodile habitat where you can find these massive creatures lying on the banks basking in the sun. This is a day-use area only and swimming is NOT an option. The second detour is Mugs Lagoon that offers fantastic scenery, especially of the water lilies covering the water. This isn’t a safe swimming hole either. Upon reaching the T-junction with Parry Creek Road, hang a left and drop into the Parry Creek Farm for a cuppa and scones. They also provide accommodation and camping options as well as a café and restaurant that operate from April to September. The resort is a haven for twitchers as the birdlife is plentiful and keep an eye out for the resident salties in the resort lagoon. Back out onto the Old Halls Creek Road, head west for approximately 6km before turning right onto the track out towards Marlgu Lagoon part of the RAMSAR listed Parry Lagoons Nature Reserve. On your way out to the lagoon are the remnants of the Old Telegraph Station built in 1914 to aid ships coming into Wyndham, and then during World War One by naval intelligence to intercept radio traffic.

At Marlgu Lagoon you’ll find a raised walkway and bird hide, the perfect way to view some of the 180 species of birdlife recorded within the reserve and any saltwater crocodiles that may be laying around. Swimming is not permitted in any of the lagoons. MARLGU LAGOON IS A BEAUTIFUL SPOT

From here, it’s a challenging 7km drive that loops back onto the Parry Creek Road, near Parry Creek Farm with deep sections of bulldust to contend with as you track across the Ord River flood plain. Once on the main dirt road, the driving is easy.

Parry Creek Road is a picturesque back road that runs beside the Ord River as it nears Kununurra. It’s prime cattle country and you’ll often come across herds grazing beside the road, so care is needed. There are a few free camping options along the Ord River and also a couple of springs worth visiting, Black Rock Springs and Middle Springs, especially early in the dry season when the waterfalls may still be flowing. BEWARE OF CATTLE ALONG THE ROADSIDES

The final obstacle to reaching Kununurra is the famed Ivanhoe Crossing. My stomach churns whenever I near the ford, will I be able to get across or will the force of the water be too strong, the level too high? As late in the season as it was, the flow was good, so after letting my diffs and brakes cool a bit, I locked my Prado in High 4, 1st gear and tracked nicely across the causeway, with a large crowd looking on. IF EVER IN KUNUNURRA, IVANHOE CROSSING IS A “MUST DO”

Once across, it’s approximately 11km to the Visitor Information Centre in Kununurra. Upon finding somewhere to roll out my swag for a few days, I was ready to explore this fantastic Kimberley town, but that is another story. 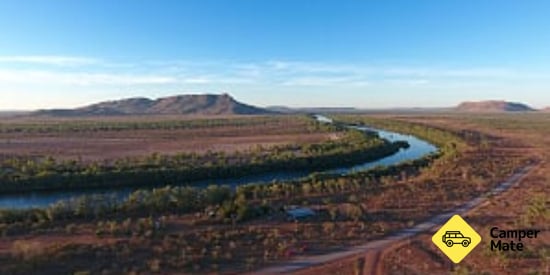 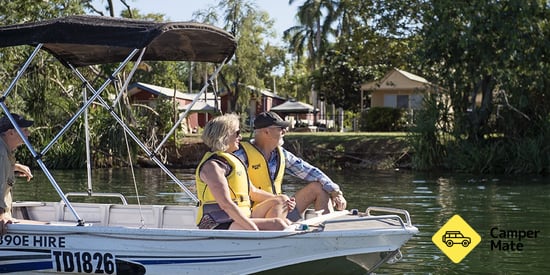 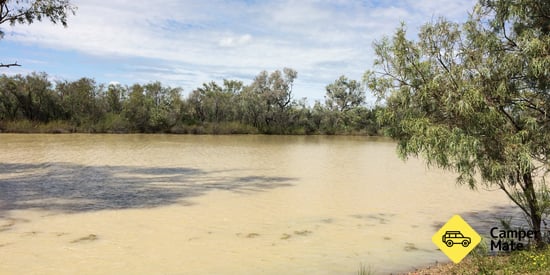 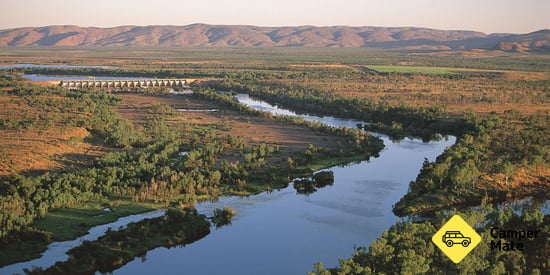 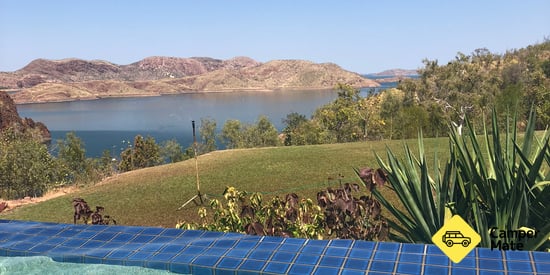 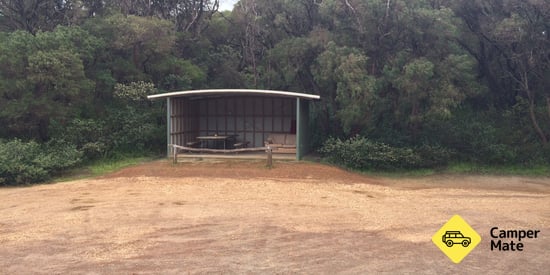 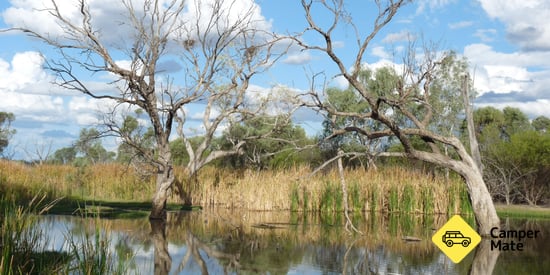