When thinking about southeast Western Australia, visions of gold mines, wheat fields and amazing beaches spring to mind. These were the things we were in the area to visit, with plans to explore Albany, Kalgoorlie-Boulder and then head back to the beautiful beaches of Esperance, with a visit to Wave Rock thrown in along the way.

We were really surprised however, to find that some of the most enjoyable experiences we had visiting this area came not from seeing the famous big-ticket items such as Wave Rock or the Super Pit Gold Mine at Kalgoorlie-Boulder, but instead from discovering and exploring many of the lesser known rock formations and salt lakes found throughout the area. We assumed the Wave Rock was the only impressive rock formation in this part of the world but we discovered that there are so many more and usually with great bush camps nearby. We left Albany on a cold and rainy morning and headed towards Hyden. The plan was to stop at Porongurup National park and climb the Castle Rock Granite Skywalk before driving on towards Hyden. It looked amazing in all the tourist brochures we’d seen.

Unfortunately, the weather did not agree with our plans and when we arrived at the turn-off it was still raining and the clouds were so low and thick we couldn’t even see Castle Rock. We decided it wasn’t worth the risk of climbing up slippery wet granite rocks when the cloud was so thick we wouldn’t be able to see the view anyway. We continued on our way, passing through Cranbrook, Katanning and Dumbleyung before arriving at Lake Grace. Lake Grace has two huge interconnecting salt lakes, Lake Grace North and Lake Grace South, which are so large they never completely fill. With a large thunderstorm threatening, we set up camp in a lovely free camp called the Jam Patch.

The camp is provided by the Lake Grace Land Conservation District committee and is situated in a 202-hectare bushland reserve on the site of the old community tennis court grounds. You need to be fully self-contained as the only facilities are a brick shelter near the old tennis courts and a small water tank. The campground is very peaceful and there are great walking trails to granite outcrops and the salt lakes. We were the only ones there that night and were treated to a fantastic lightning show from the passing storm.

The next morning we headed on to Hyden and Wave Rock. The weather was still soggy and grey and we noticed a lot of water along the roadside. The walk into Wave rock from the carpark is very short, only taking about five minutes, although there is a longer circuit walk you can complete. As the weather was still pretty awful we decided on the short walk.

Wave rock was quite different from what we expected. The first thing you see is the giant granite wave formation which is 15 meters high and 110 meters long with vibrant striping throughout the rock. Then you look up and see a low wall along the top of the rock and realise that the “wave” is only the front face. To the side of the wave are a set of stairs that lead you past a dam to the top of the rock, where you can finally see just how big the rock formation truly is. The wall along the top is not a safety feature as you might expect but is actually used to channel any rainwater into the nearby dam essentially turning the whole rock into a water catchment system. What a clever idea! There is a 3.6km walking circuit which takes you to all the interesting formations around Wave Rock and includes a 1.4 km walk to Hippos Yawn. If you don’t feel like walking you can take a short drive to Hippos Yawn. The kids had a great time exploring the Yawn and finding small tunnels at the back. As we were leaving Hyden we stopped in at the gift shop for some souvenir shopping and to check the road conditions and found that the storm that had skirted around us the night before at Lake Grace had dumped a lot of rain between Hyden and Norseman closing the road we had planned to travel on.

The lady at the shop advised that we could take an alternate route along Emu Fence Road to the Great Eastern Highway. She told us that the road was unsealed but in good condition, so we decided to give it a go. This turned out to be a great decision as it lead us to one of our all-time favourite campsites – Kara Lee Rocks. Kara Lee Rocks campsite is located approximately 140 km west of Coolgardie in the Yellowdine Nature Reserve. The campsite is operated by the National Trust and runs on an honesty box donation basis. Although there is no freshwater onsite, the campground does have a single flushing toilet and a dump point. There are heaps of level campsites, plenty of trees for shade and lots of birds and wildlife. Our favourite part about this spot is the giant granite rock formation at the edge of the campground. It reminds me of the top of Wave Rock without the wave formation at the front. There are walking trails across and around the rocks with lots of signs and historical information along the trail. The rock is absolutely huge and like Wave Rock has a wall along the edge for water collection.

The water is channelled to a flume, kind of like a metal aqueduct, which takes the water to a dam on the edge of the campground. We spent a lot of time exploring the rock, the various rock holes along the top and watching the hundreds of lizards that live up there. We had originally planned a one night stop over on our way to Kalgoorlie-Boulder but like it so much we stayed two nights. The sunsets viewed from the rock were amazing! We were expecting this to be the last substantial rock formation we would see in this area. While this was true of our time in Kalgoorlie- Boulder there were more waiting for us on our way back to the coast and Esperance. After spending a few days in Kalgoorlie to check out the super pit gold mine we headed towards Norseman on our way to Esperance. We were a little late getting on the road and late afternoon found us south of Norseman looking for a camp for the night. We had a heard of a campsite at Dundas Rocks near the ruins of an old mining town. Turned out to be a good free camp near a big rock outcrop and a salt lake. Again you need to be fully self-contained as there are no facilities onsite. We had a great time explore the huge granite boulders and the nearby salt lake, although the flies nearly drove us crazy! We had such a great time exploring southeast WA, with perhaps the most enjoyable parts being the discovery and exploration of the rocks, salt lakes and bush camps that were a little way off the beaten track. When you visit places like these it awakens the adventurous spirit in all of us and sometimes you can even get the feeling that you are like the explorers of generations past travelling into the great unknown. 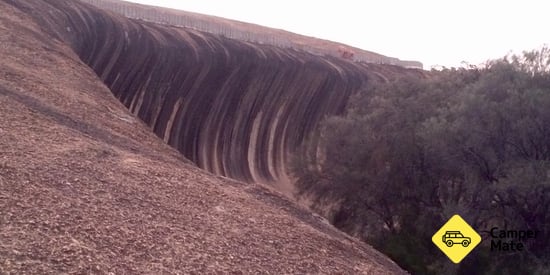 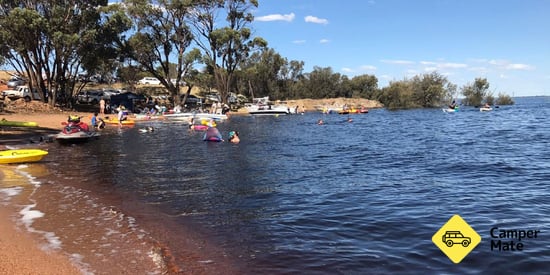 The Gems of Airlie Beach

Don't Wave Past the Capricorn Coast