The Kennedy Ranges: Getting off the beaten track

With camping and the freedom to explore our wide country edging their way back on the table, what better time to check out some remote and spectacularly underrated places, like this great gem in central WA.

Rugged, isolated and harshly beautiful, the Kennedy Range is like much of northern Western Australia. Ancient landscapes of red cliffs, eroded gullies, stunning formations, sandy dunes and sparse vegetation typical of outback country. Like a lot of places out here, the ranges aren’t exactly a destination you can just swing by, which make them perfect as part of a larger journey to explore the fantastic southern Pilbara region. The weathered plateau sprawls for some 75km across the arid region, but the easiest access is the Kennedy Range National Park. The main entrance is about 60km north of Gascoyne Junction, which lies 170km east of Carnarvon, in turn sitting about 900km north of Perth. The sealed road runs until Gascoyne Junction, where there’s fuel and basic accommodation for a quick stopover.

From here, an unsealed but generally 2WD accessible road runs through some stunning outback country, across wide sandy riverbeds lined with pale gums, and open gibber plains shrouded with hardy shrubs. It heads back in towards the eastern edge of the range, where Temple Gorge campground sits nestled against the rugged cliffs. It’s a basic bush campground, with hosts present partway through the year. I headed there at the end of summer, and while I only had to share the campground with a single other visitor, I also had some sweltering weather and hordes of flies, so the cooler months are definitely the best time for a visit.

I got in just as the first stirrings of dusk were beginning to shade the sweeping sky, with the campground in shadow and the deep amber light fringing only the tops of the rugged cliffs above. After a nocturnal walk to find some of the many geckoes that inhabit the arid region, I was up before dawn to check out the nearby Sunrise View. A short climb up a rocky hill, and I could watch the sun rise over the sweeping plains below, lighting up the weathered rock behind me. With the sun climbing, it was time to explore. The Escarpment Walking Trail hugs the crumbling cliffline, linking up three tracks that delve into the canyons that cut into the range, Temple Gorge, Drapers and Honeycomb. It makes for a full day of exploring, because there’s plenty to see and check out within the gorges, but you can always drive between each one. The interior of the eroded plateau is a maze of deep canyons, open gullies and sheer cliffs; shale and sandstone monuments carved by the movements of ancient seabeds, and millennia of wind and flowing water. Between rubble slopes and stunning time-weathered boulders, there’s brilliantly honeycombed rock faces and patterns of erosion just about everywhere you look. Nooks, caves and crevices in the red stone provide habitats for a number of species of bats and pythons, while the beautifully carved gorges are a platform for seasonal streams and waterfalls. In fierce opposition to the hot, dry arid landscape, the area is a biological hotspot. From the twisted fig trees in the gorges and the spinifex atop the plateau, to the wattles, mallee and spectacular showings of wildflowers across the surrounding Lyons River Valley Plain. With rare rainfall comes particularly vivid bursts of colour, like clumps of woolly purple-pink Mulla Mulla that shroud the expanse of red sand.
7 A deep and fascinating history

With such an ancient land comes the expected wealth of history to accompany it, beginning with the native history of the Inggarda people, who knew the ranges as Mundatharrda. It has served as an important spiritual haven and meeting place for surrounding tribes for millennia, while recent generations of their descendants grew up and worked on surrounding stations, continuing to care for and watch over the land even today. On the European front, it was first explored by Francis Gregory in the 1800s, and within twenty years pastoral land and stations had risen, fast swallowing huge swathes of native land. Thankfully, due to the sheer lack of water throughout the area, heavy grazing never truly occurred, leaving the ancient landscape largely intact when the national park was formed in 1993.

Today, the park is a part of the Wool Wagon Pathway, a self-drive trail that runs between Geraldton and Exmouth, and one of three Gascoyne Murchison Outback Pathways. On the drive in from Gascoyne Junction, keep an eye out for the remnants of an old cobbled road. It’s the result of a hand-made highway constructed in the 1930s, in an attempt to assist the mail runs to remote properties in the area. While the eastern side is the most easily accessible, the western edge of the park hides a vast trove of outback secrets. Rougher, wilder and even more isolated, this area is really only suited to well-equipped 4WD tourers. More gradual than the sheer cliffs to the east, the low plateaus, crumbling mesas and rugged buttes here are broken by stony plains, sandy rises and arid grasslands. From the soft sand of the Gascoyne River crossing, the trails across the area are wild and unmarked, and require appropriate planning and navigation. If you’re heading back towards Carnarvon, or coming from it, Rocky Pool is definitely worth checking out. About 40km from Carnarvon is a signposted dirt track to the north, that leads to a large pool filling a bend in the mostly dry Gascoyne River. Here, you’ll find water almost all year round, making for one of the most serenely beautiful outback waterholes I’ve ever come across. Gnarled platforms of red rocks and wind-rippled sand sit starkly around a long pool of deep blue water, and the vibrant greenery and pale trunks of ghost gums and paperbarks. It’s another wonderfully isolated place that made me feel like I was in the absolute middle of nowhere, and it was the perfect spot for a cool swim after a couple of hot days in the ranges. With the gentle dusk light bathing the rugged surrounds, I was serenaded by the melodic cacophony of hundreds, if not thousands, of ducks, cockatiels, budgerigars, corellas, galahs and other birds coming in to drink. 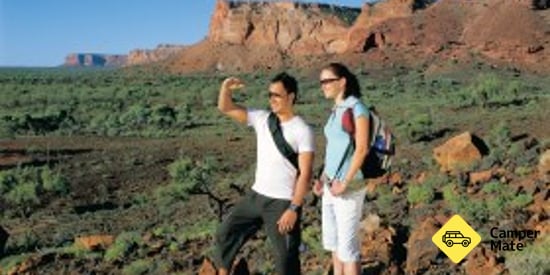 Lockleys Pylon Track: a walk in the wildflowers

That Sinking Feeling: getting stuck in the Simpson Desert

How to Perform a River Crossing in a 4WD

The Simpson Desert: an adventure in the dunes

Mucking Up: a mud-driving how-to

The Best Summer Things to Do in South Australia